Salceda, chairman of the House Committee on Ways and Means, filed House Bill 5913, which aims to expedite the rollout of critical anti-poverty measures and help achieve the country’s inclusive growth goals.

He said virtual banks are able to provide financial services at much more favorable rates, as they do not incur such expenses as establishing and securing branches and maintaining automated teller machines (ATMs). 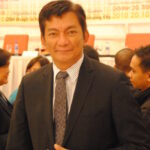 “The opportunity for regulation is clearly now, when the industry is yet to go in full swing. The industry’s potential, however, is staggering, with CIMB recording a 97 percent growth in deposits from the second quarter to the third quarter of 2019,”

Salceda said in his explanatory note.

The bill seeks to encourage virtual banking as a means to improve financial inclusion and to promote the development of financial technology. It also outlines a framework for consumer protection in virtual banks, including deposit insurance and protection against unauthorized transactions.

“For far too long, the approach of many regulatory agencies in the Philippines has been to unduly meddle in inevitable markets (such as those among new transport platforms), instead of anticipating a largely positive industry by providing appropriate and fair rules at the earliest opportunity,”

“With this bill, this representation hopes to build confidence and stability in the virtual banking sector, while promoting associated national goals such as financial inclusion and technological development,”

As an industry promoting measure, he said the proposal is expected to result in encouraging virtual banking to grow into a PHP903 billion-peso industry.