Fintech Set to Enter a New Phase in the Philippines

Strong fundamentals, a supportive regulator and a comprehensive cell phone coverage, are some of favorable attributes of the Philippine market set to drive the digital transformation of the country’s financial sector, according to a report released earlier this month by the Milken Institute.

In particular, the paper suggests that the Philippine fintech sector may soon be entering “a new phase of development” driven by the large, mobile-savvy and increasingly well-off generation of Filipinos who will increasingly be demanding digital financial services.

“The financial technology, or fintech, sector in the Philippines is maturing and is now attracting a rapidly increasing number of users and more sizeable capital investments,” the report says.

“2019 may mark an inflection point where the country will be able to make a fundamental shift from a paper-based payment system and low levels of financial inclusion, to a widely accessible and digital financial services industry.”

But in order to realize the full potential of fintech, deeper dialogue and collaboration must occur between fintech firms, traditional financial institutions and government actors, the report says, in addition to continued education and engagement with the population at large, particularly with Filipinos who lack financial access.

Obstacles to fintech adoption in the Philippines

The report notes the “limited” financial literacy of Filipinos nation-wide, as well as the low financial inclusion rate in the country, two major limitations to fintech adoption.

A 2015 World Bank survey found about two-thirds of the Filipino adult population lacked the basic numeracy needed to make rudimentary price comparisons, and only 29% of survey respondents were able to correctly answer simple questions about compound interest.

Another key challenge is Filipino startups’ struggle to access capital and talent. According to PwC’s 2017 Philippine Startup Survey, the top restraint preventing innovation among the local tech startup community was access to financial resources, as identified by 81% of respondents. After access to finance, Filipino tech startups surveyed cited the lack of talent as a barrier to their development. 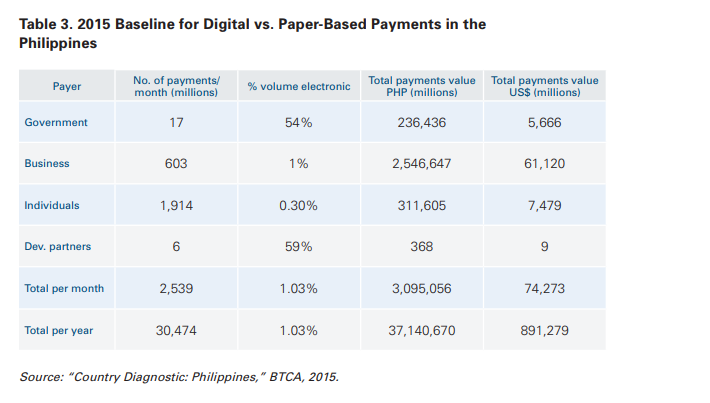 Finally, the report claims that the banking sector as a whole has been relatively slow to embrace technological change. With few exceptions, such as UnionBank, the traditional banking sector in the Philippines has approached fintech through narrowly focused, product-specific partnerships, and hasn’t yet fully integrated new fintech solutions into back-end processing and product development.

In the Philippines, the majority of micro, small and medium-sized enterprises (MSMEs) as well as the adult population are lacking access to formal financial services and financing.

According to the Financial Inclusion Survey (FIS) by Bangko Sentral ng Pilipinas (BSP), the Philippines’ central bank, 53 million Filipino adults, or 77% of the adult population, did not have a formal financial account of any kind in 2017, and only 12.4% of Philippine firms use bank credit to finance investments, compared to an average of 20.5% for the East Asia and Pacific region, found the World Bank’s Enterprise Survey.

The lack of financial access is partly due to the country’s geography and historical poverty which have limited the expansion of traditional brick-and-mortar financial institutions, the report says, noting that a third of municipalities in the Philippines do not have a bank branch, and about 7% of Philippine communities lack any financial access point.

But based on key driving factors, including the country’s large, growing and youthful population, rapid urbanization, and growing mobile and Internet penetration rates, there is good reason to believe that the digital transformation of the Philippine financial industry may happen sooner than later, the research says.

The Philippines is currently the world’s 13th most populous country, with about 110 million citizens and the figure is set to grow to 125 million by 2030. Additionally, nearly a third of the population is less than 15 years old and the country will remain relatively young over the next several decades.

In terms of mobile and Internet penetration, 20 million new users have gone online over the last two years. In 2018, the Philippines recorded an Internet penetration rate of 63%. More importantly, most adults who use the Internet, 86%, do so from mobile devices.

The Philippines’ fintech industry has witnessed significant growth with many new companies being formed over the last several years and fintech investment reaching a record of US$96.6 million in 2018. 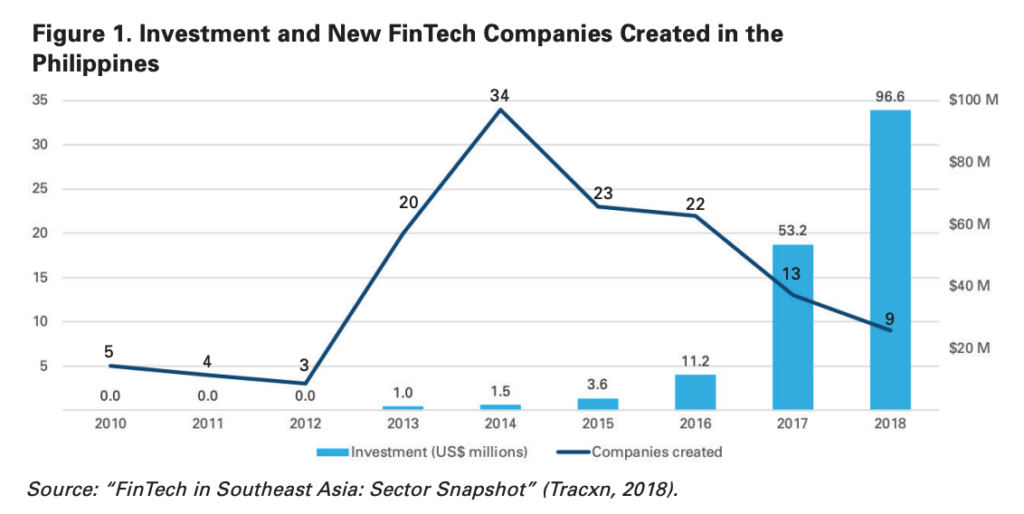 Early leaders in digital payments in the Philippines are telco firms Globe and PLDT, as well foreign “techfin” giants including Ant Financial, Tencent and Grab, the report says.

The Philippines Has a Pressing Tech Talent Shortage: Report Shows

Demand for Sustainable Finance on the Rise in APAC