In August 2018, President Rodrigo Duterte signed the Philippine Identification System Act into law to create a national identification system where a single official identification card will be issued to every citizen that combines various government-issued identification. Through the act, he aims to promote good governance, enhanced governmental transactions, and subsequently create a more conducive environment for trade and commerce to thrive.

Among the information collected are demographic data (such as full name, sex, blood type, date, and place of birth) as well as biometric information (such as a full set of fingerprints, a front-facing photograph, and iris scan). There are three steps to the

PhilSys registration process, which are:

Progress Of PhilSys in The Philippines

Upon the completion of Step 2 in the registration process, it may take up to a maximum of six months for the individual to receive the physical PhilID card. According to the PSA, more than a million PhilID cards have been delivered by the Philippine Postal Corporation as of August 16, 2021.

However, the PSA is planning to launch a mobile version of the ID that individuals can use while waiting for the physical card. After the mobile ID is operational, individuals can use their PSN to start making transactions. A directive has been issued by President Duterte in May 2021 to register 50 to 70 million individuals on PhilSys by the end of 2021. 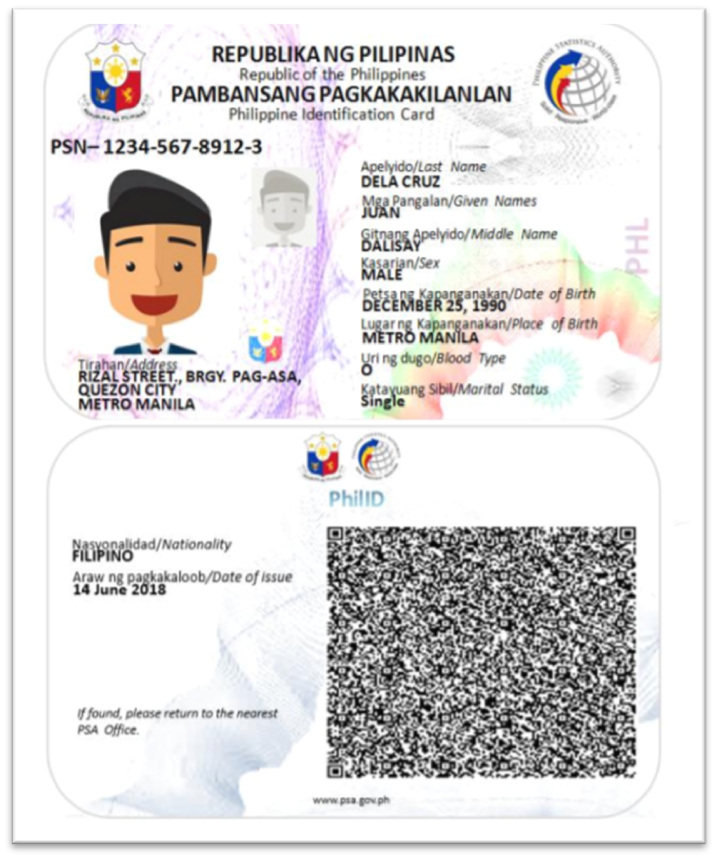 A sample of a PhilID card, Source: Philippine Statistic Authority

The Benefits of PhilSys

Among the key benefits that PhilSys will bring are convenience and efficiency by having a unified identity system, as compared to the numerous identification cards issued by the various government agencies in the Philippines. According to the PSA, the PhilID can be used for the opening of bank accounts, admissions to schools or government hospitals, transactions related to employment or tax purposes, and to access social welfare and benefits granted by the government.

Serving as a foundational digital ID system, the PSA hopes through PhilSys, both the delivery and accessibility of services can be transformed in the nation, and subsequently enabling a faster transition to a digital economy.

Secondly, PhilSys will also promote greater financial inclusion by giving low-income citizens access to basic banking services. With 66% of its population unbanked, the Philippines are among the top ten unbanked countries in the world.

Furthermore, in its 2019 Financial Inclusion Survey, Bangko Sentral ng Pilipinas (BSP), the central bank of the Philippines, discovered that the inability to fulfil documentary requirements, including having a valid ID, is one of the key reasons why most Filipinos chose to remain unbanked. PhilSys can address this problem by granting these citizens a verifiable digital ID.

A digital ID system also allows low-income citizens living in rural areas to be verified digitally and receive aid without having to be present at a physical location, which may be an impediment to many. With these benefits, hopefully, the quality of life for these citizens will also be improved. 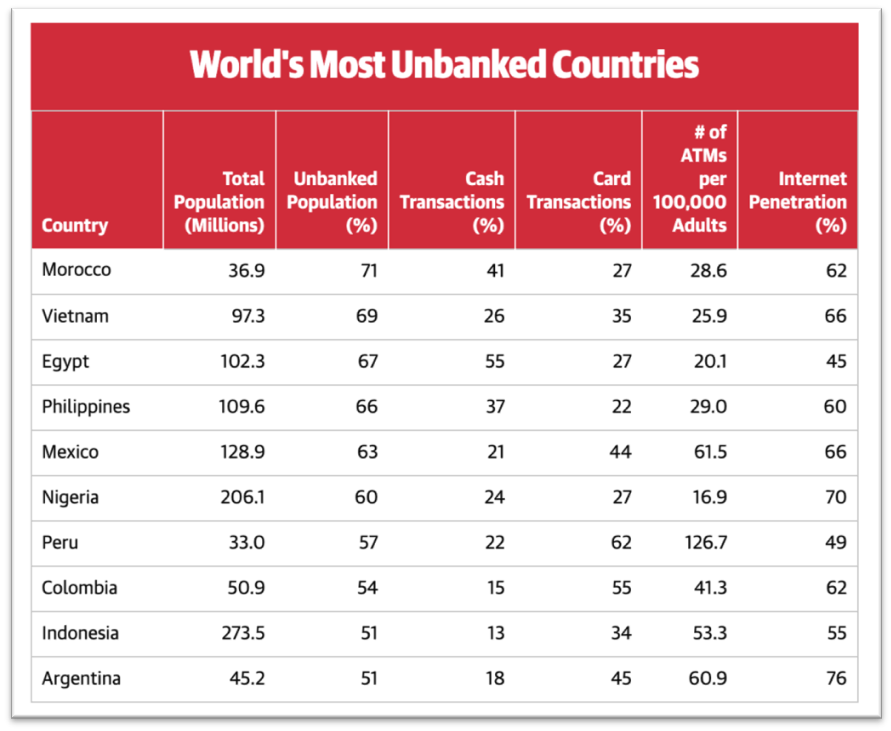 At the launch of PhilSys in October 2020, Karl Kendrick Chua, who was then the acting secretary of the National Economic and Development Authority, stated that he hopes PhilSys can be a catalyst to increase the use of electronic payments in the Philippines. A central digital identity system will also increase the Philippine’s competitiveness in the digital economy.

Additionally, in the wake of the pandemic with restriction orders imposed, a national digital ID can help businesses conduct their businesses online safely and minimise the risk of fraud, which increased in the Philippines due to the Covid-19 pandemic.

E-KYC Services in the Pipeline

The PSA also aims to launch the biometric authentication and Electronic Know Your Customer (e-KYC) services based on fingerprint biometrics, facial photographs, and SMS-based One Time Passwords (OTPs) for demographic verification by the end of 2021. Through this approach, authentication and verification of digital ID holders can be performed without requiring physical cards.

According to a study that was conducted by McKinsey, the eKYC process has the potential to reduce customer onboarding costs by 90%. Additionally, it can also save time and provide a more convenient and digital-driven experience for clients. A successful example is evidenced in India, where the Aadhaar-enabled e-KYC platform managed to reduce the cost of the KYC process for operation from Rs 40 ($0.60) per customer to Rs 5 ($0.07), according to a report titled ‘The Business Case for Payment Banks in India’ by the GSM Association (GSMA). 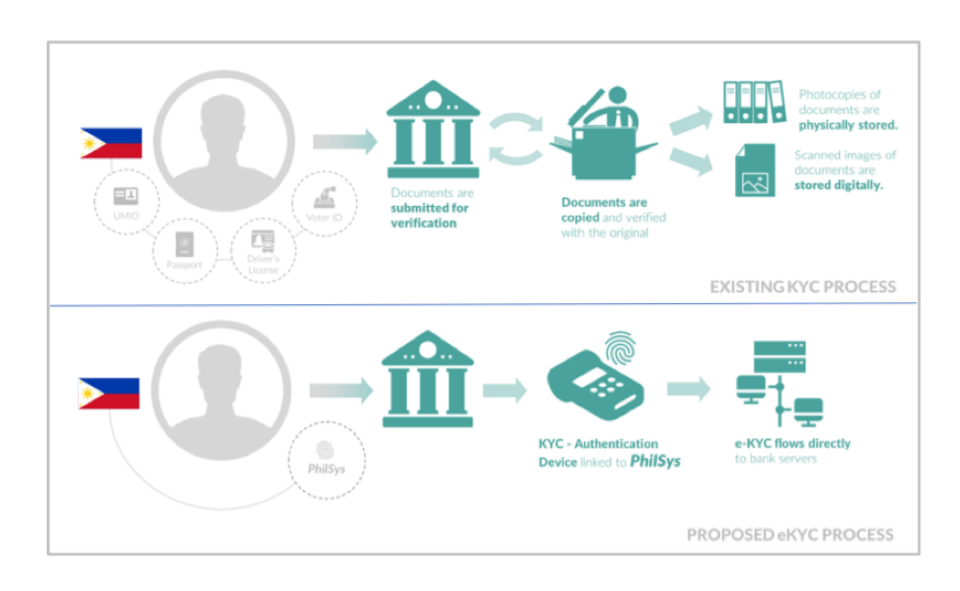 However, the rolling out of PhilSys is not without its challenges. Several Facebook accounts and websites have since emerged, falsely claiming that they are legitimate online platforms of the PSA and PhilSys. On May 27, 2021, the PSA released a list of fraudulent sites, which can be accessed here.

Under the Implementing Rules and Regulations of the Philippines Identification System Act, a penalty of PHP 1 million (about $20,000) to PHP 3 million (about $60,000)and imprisonment from three to six years will be imposed on those caught guilty in related PhilSys scams.

The PSA also went on to remind the public not to trust any third parties with their personal information, and to only provide their personal information on the official platform. According to the PSA, the permanent 12-digit PSN is microprinted on the back of the PhilID to ensure that it’s not easily seen or captured. Likewise, the 16-digit PhilID Card Number (PCN), a public version of the PSN, also has security features. The PSA has advised the public to only use their PCN for transactions, instead of the PSN.

Additionally, the PSA also reassured the public that they are committed to ensuring the privacy of the data collected. There are safety measures in place for information security, cybersecurity, data protection, and privacy, in compliance with Republic Act No. 10173 Page 9 of 9 or the Data Privacy Act of 2012 (DPA), its Implementing Rules and Regulations (IRR), and other relevant issuances of the National Privacy Commission (NPC).

As the Philippines aims to become a digitally inclusive society, PhilSys is an important initiative to achieve this vision. But for PhilSys to be successful, cooperation is also needed from other parties such as banks, government agencies, and businesses to recognize the validity of the PhilID without the need to provide any other identity documents. More importantly, a high citizen enrolment remains a crucial factor in this endeavour.