Philippines’ New Generation of Startups Will Boost E-Commerce and Fintech

The Philippines is entering its third generation of startups, building on the groundwork laid by early tech pioneers and innovators during the past two decades.

This new generation of startups are now thriving on the back of government support and investors’ confidence, and will ultimately fuel the growth of the three key pillars of the domestic startup ecosystem, namely logistics, e-commerce and fintech sectors, a new report by Filipino venture capital (VC) firm Core Capital says.

The report, titled the Philippine Startup Ecosystem Report 2021, looks at the state of the Filipino’s startup landscape, outlining the emerging trends and sharing predictions for the years to come.

According to the report, a new generation of startups are emerging out of the Philippines. Young tech companies like Kumu, a video sharing and e-commerce social networking service, Tier One Entertainment, a top tier gaming and esports entertainment company, Maria Health, a healthcare startup, and Great Deals, an e-commerce enabler offering digital marketing services, were all founded within the past seven years and have witnessed notable growth since the beginning of the pandemic.

Kumu closed a massive US$100 million Series C funding round in October, Maria Health received backing from Insular Life this month, Tier One Entertainment is currently working on a Japan expansion, and Great Deals will start launching in other Southeast Asian countries next year after raising a US$30 million Series B in May.

According to the report, Filipino startups have raised a record of US$858 million in funding so far this year. That’s more than what was raised in the previous three years combined. Surging financing activity came on the back of rising digitalization amid COVID-19. 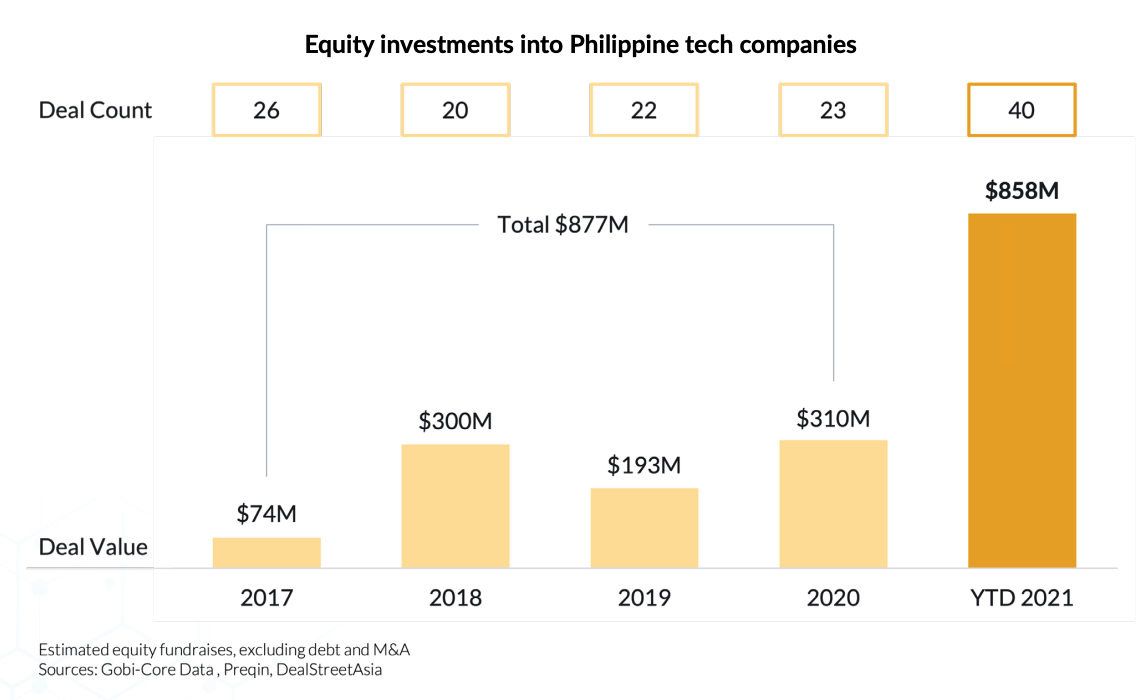 This burgeoning startup ecosystem will further propel the fintech sector, one of the three pillars supporting the sustainable growth of the startup landscape, the report says.

Alongside e-commerce and logistics, fintech has been the big winner of the massive shift to online channels induced by the pandemic, with first movers including telco-backed fintech companies Mynt, the operator of GCash, and Voyager Innovations, the company behind PayMaya, benefiting the most from the surge in fintech demand, the report states.

Both companies said they have experienced exponential growth over the past year, with their respective userbase more than doubling to 46 million for GCash, and 40 million for PayMaya, data compiled by Core Capital show.

Though these leaders are dominating the Filipino digital finance space, new fintech startups continue to be minted daily and some are gaining considerable traction.

Digital bank Tonik managed to attract US$20 million in retail deposits in its first month of operation. Founded in 2018, the startup has raised US$44 million in funding from names including Sequoia India, iGlobe, Altara, and Insignia Venture.

Cryptocurrency exchange Philippine Digital Asset Exchange (PDAX), which closed a US$12.5 million funding round in August 2021, claims that since March 2020, its userbase has grown by 25 times while monthly volume transactions has risen by 80 times.

Data from the central bank show that the number of fintech startups increased 7.3 times between 2016 and 2020, surging from just 30 to 220. Fintech startups accounted for 4.7% of new startups over the pat 1.5 years.

Moving forward, government support and investors’ bullishness in the prospect of fintech to support the domestic financial inclusion agenda will further fuel growth in the space, the report says.

Although financial inclusion has significantly increased over the past years, rising 6% points between 2017 and 2019, the proportion of unbanked in the Philippines remains high at 71% in 2019, representing a major business opportunity for fintechs to pursue, the report says.

Additionally, recent government initiatives such as the rollout of the Philippine National ID System (PhilSys), which requires registrants to have bank accounts, and national efforts to increase financial inclusion like the Digital Payments Transformation Roadmap 2020-2023 which seeks to expand the financially included to 70% of Filipino adults, are further laying the foundation for greater adoption of fintech solutions.