Top 7 Fintech Startups in the Philippines for 2020

Last year, Manila was named one of the world’s friendliest cities in the world for fintech startups, and was recognized for its strong English-language skills and well-established outsourcing industries.

Fintech companies already compose 15% of Manila’s startups, according to Startup Genome’s Global Startup Ecosystem Report, and the market is expected to grow from about US$5.7 billion in 2018 to US$10.5 billion by 2022.

The Philippines’ fintech industry is expected to continue growing in 2020 on the back of memorable developments and deals in 2019. The following are seven fintech startups in the Philippines which made significant strides last year and are now poised for recognition.

Founded in 2018, Tonik is a startup headquartered in Singapore that’s building the first digital-only bank in Southeast Asia. Tonik’s offering will be focused on providing banking products that fit seamlessly into the lifestyle of customers with simple consumer payment, savings, and borrowing solutions delivered through a smartphone.

Tonik received its banking license from Bangko Sentral ng Pilipinas, Philippines’ central bank, in January, which makes it technically the first digital bank in Southeast Asia and one of the very few globally to be operating on the basis of its own bank license.

The startup raised $6 million in February and will be launching operationally later this year in the Philippines. Tonik’s support and research and development (R&D) functions are based in Singapore and Chennai, India.

MarCoPay is a venture established in mid-2019 by Japanese shipping firm NYK Line and its local partner Transnational Diversified Group (TDG). The company provides an electronic money platform designed mainly for seafarers hired outside Japan. The app utilizes QR codes that can be used for completing pre-boarding procedures, receiving and converting salaries into digital currency and spending this e-money for onboard purchases.

The company received its e-money license in December 2019, and is currently operating its app in beta. MarCoPay is preparing for a full launch, which will focus mainly on allowing seafarers and vessels’ masters to make electronic money transactions aboard their ships, including sending money home to their families, and will include value-added features anchored on its digital currency such as enabling digital purchases in ordinary stores and giving out discount coupons.

PhonePera, which means Phone Money in Tagalog (Filipino Language), aims to transform the lives of millions of Filipinos who do not have access to conventional banking services. An e-wallet product of AiPayGo, a fintech company under the incubation program of Republisys, PhonePera will be designed for people at the bottom of the socioeconomic ladder, those who don’t have access to bank accounts or a simple debit card.

PhonePera was unveiled in late-2019 by founder Randy Prado, a mobile tech veteran who previously held positions at Nokia Australia/NZ and Portitech (Portable Internet Technologies). In an interview with Inquirer.net, Prado said that he envisions PhonePera being the first mobile payment technology developed in the Philippines expanding globally to the huge Filipino communities and foreign workers deployed around the world in Australia, Europe, North America, and other neighboring Asian countries.

SeekCap targets the Philippines’ underserved micro, small and medium enterprises (MSMEs) community, which constitutes more than 99% of all businesses in the Philippines and contributes 63% of total employment.

Founded in 2018, PearlPay is a fintech startup and mobile wallet whose mission is to help financial institutions, especially rural banks, be commercially competitive with access to the latest and innovative banking solutions. PearlPay aims to become the national digital payment enabler and gateway in the country by providing quality and affordable banking solutions to financial institutions and individuals previously underserved.

PearlPay grew significantly in 2019. The company signed a pilot program agreement with BHF Rural Bank to test a new generation of cloud-based financial services set to be launched in the Philippines, and expanded to Hong Kong and Indonesia.

Founded in 2019, PayMongo is a new payments processing startup that allows merchants and MSMEs to accept credit card, e-wallet and over-the-counter payments.

PayMongo raised US$2.3 million in a seed funding round in October from investors including Stripe, PayPal’s co-founder Peter Thiel, and Y Combinator. The startup said at the time that it had recorded transaction growth at an average of 116% week-over-week.

In January, PayMongo teamed up with Globe Telecom’s mobile wallet GCash to expand its payment options. It said that it had onboarded some 3,500 merchants onto its platform.

Last year, PayMaya expanded its loading network to 27,000 channels nationwide, including banks and a fintech partner, and in February of this year, it partnered with the city government of Manila to roll out the PayMaya citizen ID cards to its residents. The cards will be used for the distribution of cash benefits from the local government and residents will be able to utilize it to purchase goods from the city-managed Kadiwa stores, which are equipped with card and QR code payment systems powered by PayMaya.

The same month, the Bureau of Internal Revenue (BIR) officially welcomed PayMaya as a new digital channel, enabling individual taxpayers to use the PayMaya mobile app to settle their tax payments.

You can check The Philippines Fintech Report 2018 here. 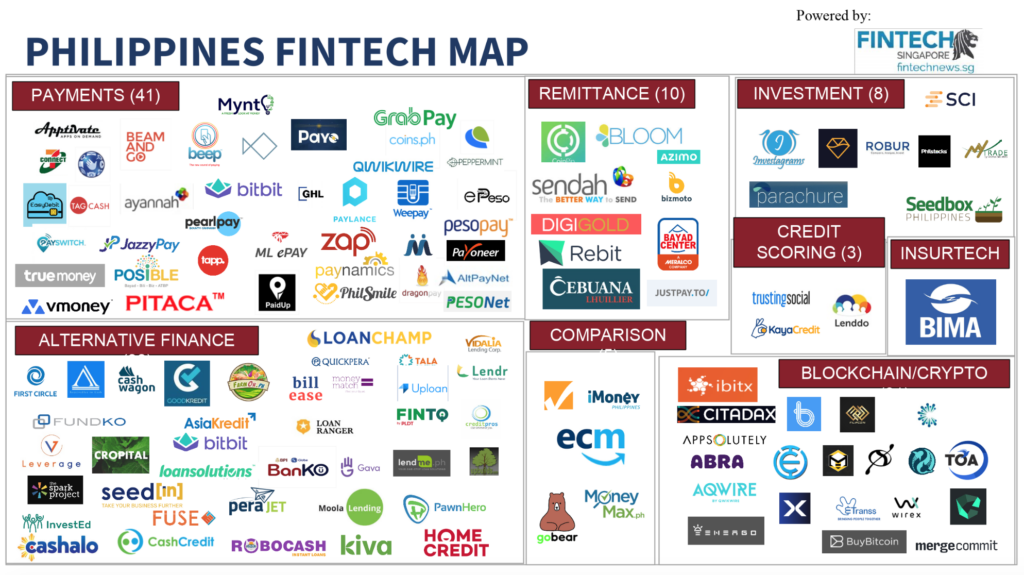 15 New Philippine Fintech Startups to Watch out for in 2019