How Will Branch Banking Evolve in the Digital Age?

With digital adoption spiking up in recent years coupled with Bangko Sentral Ng Pilipinas’ recent introduction of the digital banking framework, industry pundits have been examining the relevance of branch banking and whether it will survive the digital age.

A report by Roland Berger indicated that 11,000 branches are expected to close globally within 10 years. In the Philippines, the same report anticipated a 21% reduction in branches.

In a webinar organised by the Fintech News Philippines, we were joined by Paolo Baltao, Senior Vice President at Philippine National Bank, Rachel Freeman, Chief Growth Officer at Tyme, Randy Montesa, Head of the Card and Electronic Banking Group at Landbank, and Riddhi Dutta, Regional Sales Director for ASEAN and South Asia at Backbase.

The panel discussed if the extinction of bank branches was truly imminent, or if there were deeper nuances to consider.

Baltao noted that bank branches in their current state would inevitably disappear. Branches as servicing points are no longer relevant, he said, but have value as a financial marketplace and a sales touchpoint.

For instance, he pointed towards agent banks in the Philippines – community neighbourhood stores, pawn shops or grocery shops – as an example where banks are able to acquire more customers by reimagining customer touchpoints. 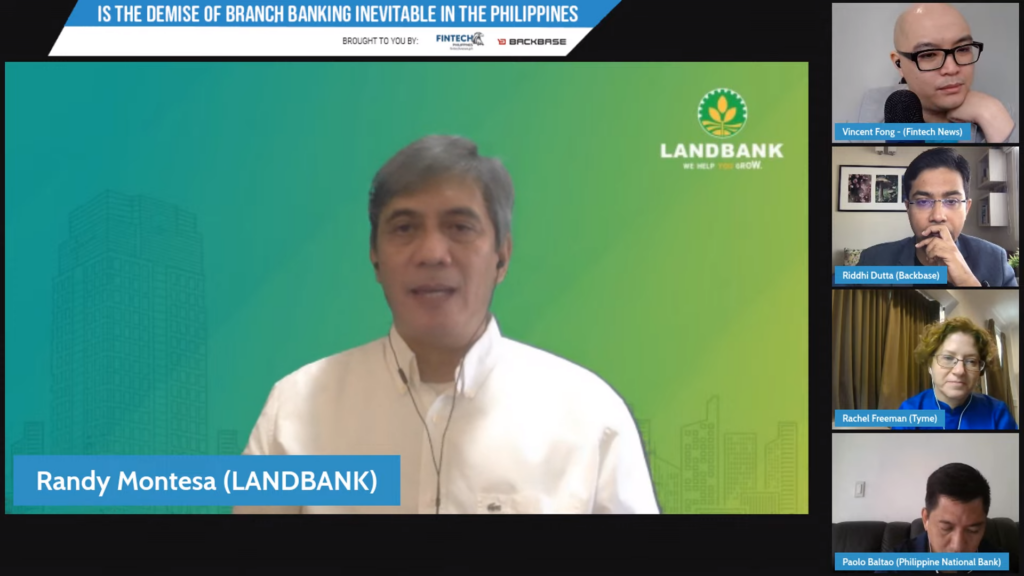 Montesa disagreed with the assessment that branches will see a 21% decline in the Philippines, saying that it would take at least two decades until branches can disappear from the Philippines. Citing World Bank data, he pointed out that in 2018, there were 9.02 branches per 100,000 adults. In 2019, there were 9.2.

“While there is evidence supporting the steady decline of bank branches globally, the annual rate of decline is just not fast enough to forecast that branch banking will be irrelevant over the next five years,” he said.

Montesa noted that Landbank was looking to add 100 more branches after its impending merger with United Coconut Planters Bank. This is despite accelerated growth in its e-banking channels in the past two years because of a widely diversified customer base, including corporates, SMEs and remotely located consumers.

Dutta noted that traditional banking has become “synonymous” with inefficiencies. Basic processes need to be reimagined for the digital age, but echoing Freeman’s thought, he noted that complex products such as loans and mortgages required physical touchpoints.

He also said that a network of branches acts as an asset for banks, citing a previous conversation with a top banker based in the Philippines. It’s a matter of making them digital-enabled rather than digital-first, he said.

Baltao noted that the future vision for branch banking was not about the number of branches, but about the purpose of branches. He put forward the perspective of branches as real estate. In this context, banks needed to find a way to maximise the branch real estate that they have through new models, such as servicing customers outside of that bank’s network. 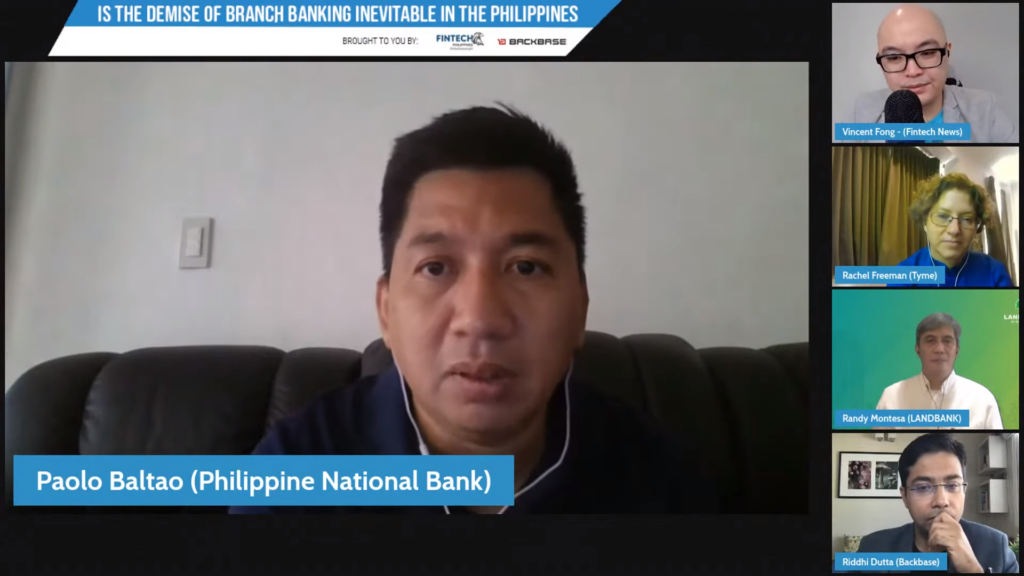 “A customer is a wallet, and I’d like to get as much of that wallet as I can,” he said.

He further said that branches needed to be transformed from simply a transaction processing unit into what he referred to as a “7/11 of financial services.” Automating basic functions at a bank, such as telling, is a way to achieve this to make space for more revenue-generating activities. 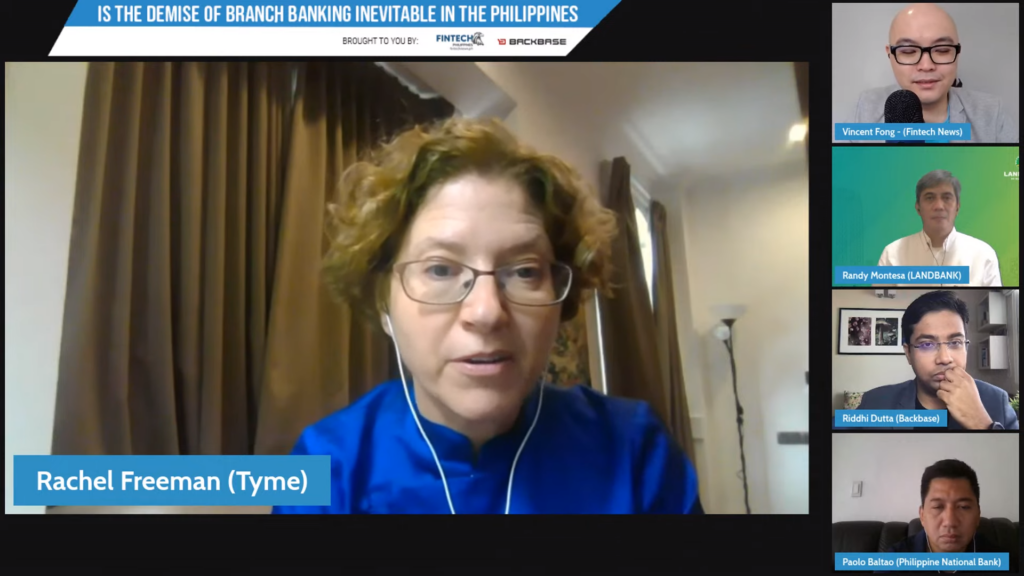 Customers can open a bank account and get a personalised debit card from these kiosks within minutes. The company would also be introducing roaming kiosks integrated into remote areas, to create more access to GOTyme’s touchpoints. Furthermore, she also spotlighted Tyme’s cloud-based system to bring down fees by enabling pay-as-you-go.

He added that a third model, where branches transform into local office hubs, where employees spread across a wide geographic area have social contact, was also possible. Additionally, they could also potentially become innovation centers to support entrepreneurship and MSMEs, he said. 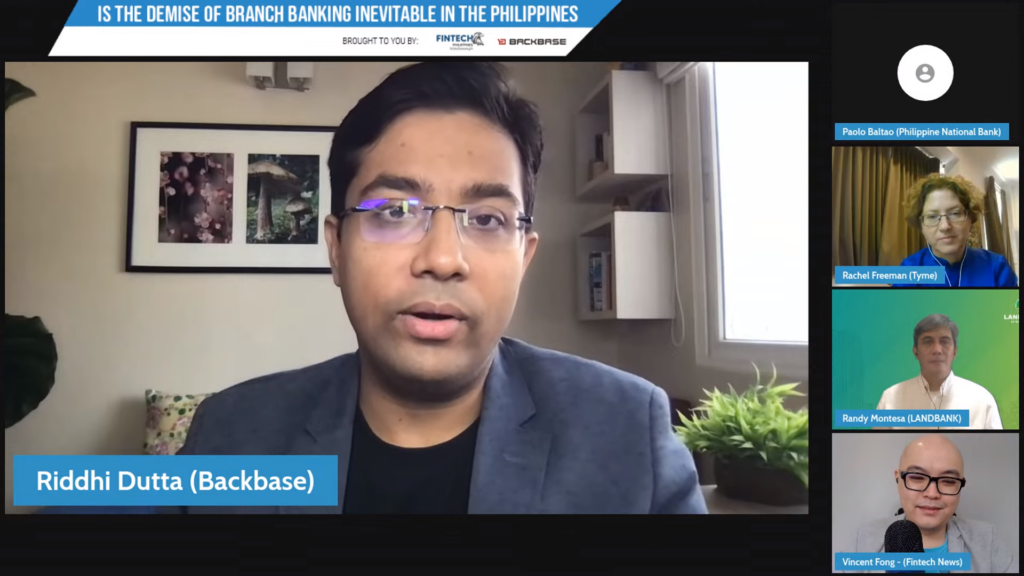 Dutta said that financial institutions that have invested more in digital channels are seeing improvements in customer acquisition and loyalty as well as products per customer by as much as 2x potentially.

Reiterating Baltao’s thought, Dutta said that branches needed to move away from being purely service points to selling points where human interaction has more relevance. He added that data could be used to provide intuitive, interactive personal finance management, and also consolidate banking services on a unified platform.

Ultimately it’s all about banks revamping their processes with technology as an enabler, with a customer-first approach rather than a product-first approach. “It’s how you’re looking at the customer life cycle, and then figuring out which touchpoint or stakeholder would get mapped to it,” Dutta said.

The full webinar can be viewed below, if you enjoyed the content do consider subscribing to our YouTube channel for more